Journal of Researches
into the
Natural History and Geology
of the
countries visited during the voyage
round the world of H.M.S. Beagle

under the command of Captain Fitz Roy, R.N.

AUTHOR OF "ORIGIN OF SPECIES,"ETC.

A new edition with illustrations by R. T. Pritchett
of places visited and objects described.

This second edition is dedicated with grateful pleasure, as an acknowledgment that the chief part of whatever scientific merit this journal and the other works of the author may possess, has been derived from studying the well-known and admirable PRINCIPLES OF GEOLOGY

This is the Project Gutenberg Etext The Voyage of the Beagle, by Charles Darwin Project Gutenberg Etext A Naturalist's Voyage Round the World by Darwin #18 in our series by Charles Darwin. Copyright laws are changing all over the world, be sure to check the laws for your country before redistributing these files! Please take a look at the important information in this header. We encourage you to keep this file on your own disk, keeping an electronic path open for the next readers.

Please do not remove this.

This should be the first thing seen when anyone opens the book. Do not change or edit it without written permission.  The words are carefully chosen to provide users with the information they need about what they can legally do with the texts.

**Welcome To The World of Free Plain Vanilla Electronic Texts**
**Etexts Readable By Both Humans and By Computers, Since 1971**
*****These Etexts Are Prepared By Thousands of Volunteers!*****
Information on contacting Project Gutenberg to get Etexts, and
further information is included below, including for donations.
The Project Gutenberg Literary Archive Foundation is a 501(c)(3)
organization with EIN [Employee Identification Number] 64-6221541

This Etext was prepared by Sue Asscher  asschers@dingoblue.net.au

PREFATORY NOTICE TO THE ILLUSTRATED EDITION.

This work was described, on its first appearance, by a writer in the Quarterly Review as "One of the most interesting narratives of voyaging that it has fallen to our lot to take up, and one which must always occupy a distinguished place in the history of scientific navigation.

This prophecy has been amply verified by experience; the extraordinary minuteness and accuracy of Mr. Darwin's observations, combined with the charm and simplicity of his descriptions, have ensured the popularity of this book with all classes of readers-and that popularity has even increased in recent years. No attempt, however, has hitherto been made to produce an illustrated edition of this valuable work: numberless places and objects are mentioned and described, but the difficulty of obtaining authentic and original representations of them drawn for the purpose has never been overcome until now.

Most of the views given in this work are from sketches made on the spot by Mr. Pritchett, with Mr. Darwin's book by his side. Some few of the others are taken from engravings which Mr. Darwin had himself selected for their interest as illustrating his voyage, and which have been kindly lent by his son.

Mr. Pritchett's name is well known in connection with the voyages of the Sunbeam and Wanderer, and it is believed that the illustrations, which have been chosen and verified with the utmost care and pains, will greatly add to the value and interest of the "VOYAGE OF A NATURALIST."

I have stated in the preface to the first Edition of this work, and in the Zoology of the Voyage of the Beagle, that it was in consequence of a wish expressed by Captain Fitz Roy, of having some scientific person on board, accompanied by an offer from him of giving up part of his own accommodations, that I volunteered my services, which received, through the kindness of the hydrographer, Captain Beaufort, the sanction of the Lords of the Admiralty. As I feel that the opportunities which I enjoyed of studying the Natural History of the different countries we visited have been wholly due to Captain Fitz Roy, I hope I may here be permitted to repeat my expression of gratitude to him; and to add that, during the five years we were together, I received from him the most cordial friendship and steady assistance. Both to Captain Fitz Roy and to all the Officers of the Beagle1 I shall ever feel most thankful for the undeviating kindness with which I was treated during our long voyage.

This volume contains, in the form of a Journal, a history of our voyage, and a sketch of those observations in Natural History and Geology, which I think will possess some interest for the general reader. I have in this edition largely condensed and corrected some parts, and have added a little to others, in order to render the volume more fitted for popular reading; but I trust that naturalists will remember that they must refer for details to the larger publications which comprise the scientific results of the Expedition. The Zoology of the Voyage of the Beagle includes an account of the Fossil Mammalia, by Professor Owen; of the Living Mammalia, by Mr. Waterhouse; of the Birds, by Mr. Gould; of the Fish, by the Reverend L. Jenyns; and of the Reptiles, by Mr. Bell. I have appended to the descriptions of each species an account of its habits and range. These works, which I owe to the high talents and disinterested zeal of the above distinguished authors, could not have been undertaken had it not been for the liberality of the Lords Commissioners of Her Majesty's Treasury, who, through the representation of the Right Honourable the Chancellor of the Exchequer, have been pleased to grant a sum of one thousand pounds towards defraying part of the expenses of publication.

I have myself published separate volumes on the Structure and Distribution of Coral Reefs; on the Volcanic Islands visited during the Voyage of the Beagle; and on the Geology of South America. The sixth volume of the Geological Transactions contains two papers of mine on the Erratic Boulders and Volcanic Phenomena of South America. Messrs. Waterhouse, Walker, Newman, and White, have published several able papers on the Insects which were collected, and I trust that many others will hereafter follow. The plants from the southern parts of America will be given by Dr. J. Hooker, in his great work on the Botany of the Southern Hemisphere. The Flora of the Galapagos Archipelago is the subject of a separate memoir by him, in the Linnean Transactions. The Reverend Professor Henslow has published a list of the plants collected by me at the Keeling Islands; and the Reverend J. M. Berkeley has described my cryptogamic plants.

I shall have the pleasure of acknowledging the great assistance which I have received from several other naturalists in the course of this and my other works; but I must be here allowed to return my most sincere thanks to the Reverend Professor Henslow, who, when I was an undergraduate at Cambridge, was one chief means of giving me a taste for Natural History,-who, during my absence, took charge of the collections I sent home, and by his correspondence directed my endeavours,-and who, since my return, has constantly rendered me every assistance which the kindest friend could offer.

1. I must take this opportunity of returning my sincere thanks to Mr. Bynoe, the surgeon of the Beagle, for his very kind attention to me when I was ill at Valparaiso.


Voyage of the Beagle
Charles Darwin


From So Simple a Beginning Darwin's Four Great Books: Voyage of the H.M.S. Beagle The Origin of Species The Descent of ManThe Expression of Emotions in Man and Animals USA 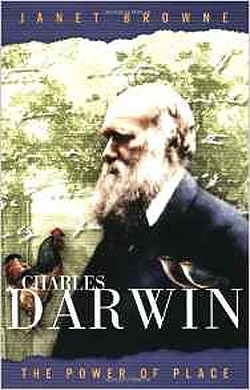