The Galapagos Sea Lion like many other Galapagos species is a distinct form found only there. There is a significant difference in size between the males and the females (known as sexual dimorphism), males can be recognised by a distinctive bump on the head, but more easily by the fact that they are so much larger than the females.

Sea Lions are the most conspicuous and numerous marine mammals in the Galapagos, they are frequently seen on sloping sandy beaches in particular as well as at sea.

Previously considered a subspecies of the Californian sea lion, (Zalphus californianus) the Galapagos sea lion has now been shown to be a species in its own regard by the analysis of genetic information. Galapagos Sea Lions prefer sandy beaches, they shelve gently and so are easier to get out of the sea from. When your primary means of locomotion are best adapted to swimming, with walking on land being secondary, walking across smooth sand becomes easier than other surfaces. Sea Lions are found throughout the islands around the coast wherever there is a suitable place to haul out.

Breeding: The season varies somewhat from island to island but is generally between June and September. Larger dominant bulls called beachmasters defend an area of beach along with some females, immature sea lions and pups in a  group referred to as a "harem", there may be anywhere from 2-30 females. The dominant male is often challenged by other males, weak challengers are seen off by posturing and vocalization, with larger ones they may come to blows. Territories are defended for a few days up to a month, it puts extreme stresses on the male who must be vigilant and cannot feed during this time.

Mating usually takes place in the sea within a month of the female giving birth, "delayed implantation" means that the embryo doesn't begin to grow for another two months, birth nine months later gives an annual breeding cycle, the actual timing varies from animal to animal however and can happen at almost any time of the year. The young start to feed independently at about 5 months, they are weaned fully at 1-3 years old. Co-operative protection of pups takes place by mothers to allow them to go to sea to feed in turn.

Feeding: Feed on fish and squid by diving for them, sardines are a common food item, though exactly what is taken depends on the availability which can vary quite significantly during the lower marine productivity that occurs in El Nino years. Fishing takes place fairly close to the coast, sea lions are rarely found beyond about 16 km (10 miles) out to sea.

Conservation status: Endangered, there has been a major decline in the numbers of the sea lions in recent decades, the population was estimated at about 40,000 in 1978. There is high mortality during El Nino events approaching 50%, the long term decline in population seems to be continuing.

Distribution: Throughout the Galapagos Islands and a small colony on Isla del Plata on the coast of Ecuador.

Predators: Large sharks and killer whales will take adults and in particular the smaller and inexperienced pups, groups of adults in reply will mob Galapagos sharks that approach inshore near to sea lion colonies. Feral dogs have been reported to kill pups and juveniles. Fishing gear can be dangerous especially for juveniles with their more inquisitive and playful natures.

Juvenile sea lions are very playful and will often interact with humans in the water, they have little or no fear of people.

Galapagos Sea Lions are generally comfortable with the presence of humans, young or adolescent pups in particular being fearless readily following human snorkelers or divers out of curiosity. Large bulls are best avoided particularly during the breeding season as they may perceive humans to be a threat, especially as an upright stance usually means a sign of aggression. Getting low is the best solution near seals as they won't feel threatened by this and will remain calmer and be more comfortable, this makes for a more positive experience all round. Also, if you want to photograph the seals, getting down to their level gives far better results than having a picture taken looking down on them from above. 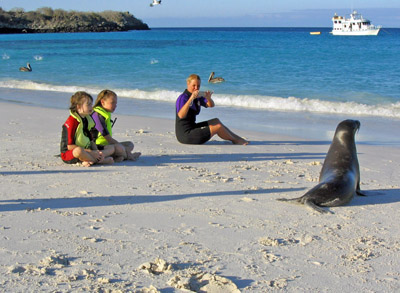 It is best not to approach Sea Lions too closely especially as they may be startled, but many of them will only regard a human being as a mild distraction or curiosity. don't disturb them unnecessarily though and don't get so close that they could give you a nip or something more substantial. Early sealers would often suffer from an immobile or paralysed "sealer's finger" after being bitten by seals and sea lions, due to the particularly rich and exotic bacterial fauna that lives in their mouths making it all go unpleasantly infected.

The natural element of Sea Lions is of course the sea, if you go all the way to the Galapagos without at least snorkelling with them, or better still diving, you will always regret not doing so (well I would anyway). So make sure you get in the water with these wonderful creatures, they'll make you feel incredibly clumsy for a start as they effortlessly cruise around at high speed changing direction with a barely perceptible flick of a flipper, but they'll also give you the biggest buzz and probably one of he most positive wildlife interactions that it is possible to have. Everything else that is just standing and watching from a distance becomes a poor second best.