The Galapagos offer much to visitors, these islands, volcanic humps pushed above the surface of the Pacific Ocean. are home to one of the Earth's premier natural history experiences.

Each day of a Galapagos cruise carries you to new sites, rich and varied vegetation, tropical fish, saltwater lakes, mangrove forests, sandy beaches, hardened lava flows from extinct volcanoes, cormorants, herons, penguins and finches with distinct lifestyles and particular beaks and feet as the tools to enable them.

Nazca or Masked Booby - Sula granti
The Galapagos are home to a range of large sea-birds.

Galapagos Giant Tortoise
Tortoises that live on the different islands of the Galapagos can be very distinct.

Galapagos Sea Lion sleeping on land
Playful sealiions provide endless entertainment as they swim around in the seas surrounding the islands, snorkelling or diving with them is a highlight of many trips. 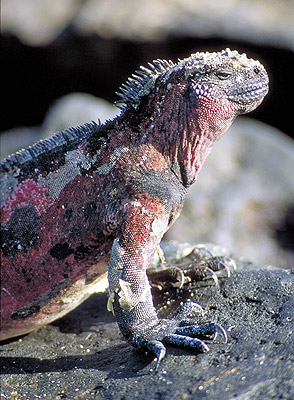 Marine iguana - Amblyrhynchus cristatus
The only marine lizard species lives on the Galapagos Islands where it is herbivorous and dives in the sea for food. 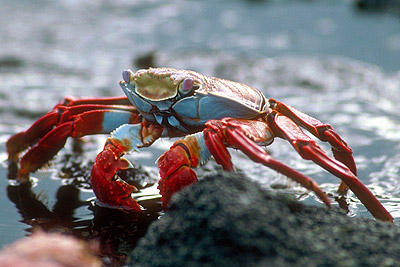 Sally lightfoot crab, Graspus graspus
Given their name from their light-footed way of scurrying across rocks.

Galapagos penguin, Spheniscus mendiculus
The most notherly species of penguins just about make it into the northern hemisphere as the Galapagos straddle the equator.
Picture - Gregory "Slobirdr" Smith used under CC2 Attribution Share Alike Generic license.

The flightless cormorant or Galapagos cormorant Phalacrocorax harrisi
A swimming bird that has lost the ability to fly, unique to the islands of Fernandina and Isabella.

Natural History
- Wildlife you can expect to see

Much of the wildlife of the Galapagos is unique to the islands and by and large the animals are not afraid of people and are easy to see, you can expect some of the most close-up wildlife encounters on the planet. From cold-water penguins to leaf-toed gecko lizards to the Galapagos sulphur butterflies, this volcanic archipelago continues to amaze and delight.

75 percent of the land birds and 97 percent of the reptiles and mammals on the Galapagos Islands are found nowhere else in the world. Galapagos giant tortoises, which may live as long as 150 years and weigh as much as 400 pounds, lumber right next to you inviting portrait photography. The islands isolation from the mainland means that many birds, iguanas, tortoises, and other animals have no natural predators. Their relative fearlessness of humans stems from this geographic isolation. The Galapagos Islands played a crucial role in the development of biological theories from evolution to island biogeography.

The archipelago's largest animals, the giant tortoises, are endemic to almost all of the islands and, having outlived heavy harvesting in the whaling era, are regarded as a symbol of survival in the Galapagos. There are now 12 remaining species from an original possibly 15.

Scientists estimate that over 250,000 tortoises dominated these small islands prior to the arrival of man, today 15,000 remain. The Charles Darwin Research Station's captive breeding program, started in 1965, has improved the species' outlook, releasing more than 2,800 tortoises to 6 different islands, including 8 giant tortoise sub-species.

The Galapagos' most famous tortoise, Lonesome George died in 2012 at the estimated age of 102. He was the last known tortoise from the island of Pinta and the last of his subspecies, when he died, so did his subspecies, he is a symbol for conservation efforts in the Galapagos and across the world.

Marine iguanas, the world's only sea going lizards, fascinated Darwin. As a young man, he grabbed one by the tail and swung it out into the ocean. It swam back. He repeated the exercise until he deduced that on land, the iguana faced no predators, but in the sea, unknown dangers lurked; though fully equipped to swim, the iguana found safety on shore.

Wings fill the skies and shores of the archipelago. Masked boobies and waved albatrosses ride the coastal thermals, flightless cormorants and penguins patrol rocky shores. Lava gulls squawk from above and Galapagos hawks scan for prey. Galapagos land birds take a casual attitude toward humans, and although they are not dramatic in color, their relative tameness makes them delightful to observe.

Three species of boobies are found in the Galapagos: the blue-footed, masked (white), and red-footed booby. Blue-footed boobies are the most common species of booby in the Galapagos Islands and are the favorite among visitors, known for their astonishingly brightly colored sky-blue feet. Their famous courtship ritual dance is characterized by raising their feet one after the other, pointing their heads and bills in the air, and spreading their crooked wings.

Boobies feed on fish and squid, they dive into the ocean from up to 80 feet in the air, tapered bills and a pointed tail help to streamline their bodies, while their air sacs in the skull and closing nostrils protect them from any impact injuries.

Sally Lightfoot crabs can be easily spotted throughout the islands quickly scurrying about. This swiftness and ability to get out of harm's way is what earned them their name: "lightfoot." Unlike most of the wildlife in the Galapagos, Sally Lightfoots are inclined to run away as they are approached to view them close up. The young crabs are black and well camouflaged amongst the rocks whereas the adults, are bright red and yellow, dramatically contrasting against neutral-colored rocks and sand.

Probably brought to the Galapagos from Antarctica by the Humboldt Current, the small Galapagos Penguin is the only penguin to live and breed on the equator. Standing about 14 inches tall, they appear more duck-like than Antarctic penguins. Adults have a bluish-black head, a white underside, and a thin white band from their eye to their chin. In total, Galapagos Penguins number just a couple of thousand, the breeding population is estimated to be as few as 800 pairs. They are most likely seen on Fernandina, Isabela, Santiago, Bartolome, northern Santa Cruz and Floreana, nesting occurs on Fernandina and Isabela.

One of the favorite animals in the islands, the playful Galapagos Sea Lions provide entertainment for visitors with their amazing abilities in the water. Snorkeling and kayaking with the pups is one of the highlights for many who visit the Galapagos. They can often be found on beaches napping, waddling or basking in the sun. Sea Lions live in large colonies, and adult males, or bulls, head the colony. Bulls can grow up to 7 ft (2 m) in length and can 800 lbs (363 kg) in weight.

Galapagos Fur Seals, far more timid than the Sea Lion, shelter themselves from the sun in shelves or caves of lava cliffs during the day. During the 18th century, these animals were heavily hunted, nearly to extinction. Today, however, their population is more comparable to that of Sea Lions.

What do I need to take?

Dress is casual and comfortable, and informality is basic to all activities. A soft-sided suitcase or bag is recommended as luggage, they are easier to stuff into the more limited spaces on boats when partially empty than rigid cases. The checked luggage aboard the TAME flight (from mainland Ecuador to the Galapagos Islands) must weigh no more than 44 pounds (20 kilos) per person, one carry-on bag is also allowed.

The Galapagos Islands like other particularly attractive ecosystems in the world is subject to threats from various sources, not least from the tourists who are attracted to it. The Islands have only been inhabited for a relatively short time as there are few or no natural resources on land that are economically important before money could be made from tourism.

The major threats to the islands are from development and growth of the human population, in 1960, there were only 2,000 people living on the islands, by 2012 this had risen to 26,000 it is projected to continue to rise in the future.

The worst impact made on the islands is by the arrival of non-native species, isolated lands such as the Galapagos are always particularly susceptible to such invasions. There are large mammals such as feral pigs, rats, mice, goats and less immediately obvious though particularly serious, invertebrates such as ants, wasps and scale pests.

Plants can also be invasive, the quinine tree, and elephant grass amongst them can have major effects on the native flora of the Galapagos, squeezing out the native plants and the ecosystem that has evolved to live on them.

More recently there has been pressure on the government of Ecuador from the people living on the islands to be able to fish the waters for food for themselves and also to harvest as a cash crop some of the more exotic life such as sea cucumbers for sale in world markets.

Leave only footprints and take only pictures


Galapagos Cruises
These are representative, please use the form above to help us find your perfect tour.
Tours leave year round and there are numerous departure dates for each cruise vessel and itinerary.